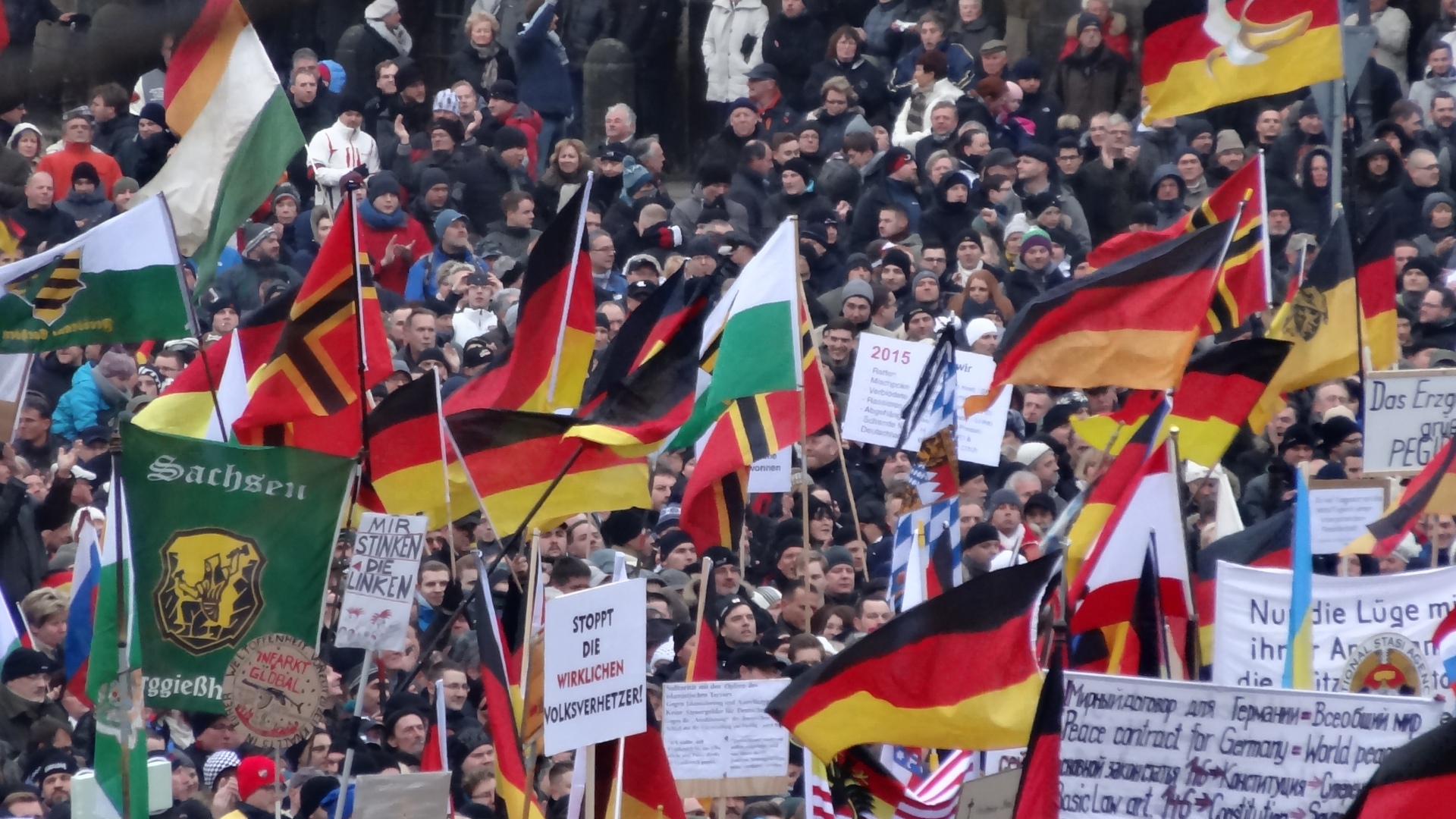 On May 7th 2015, citizens in the United Kingdom will vote for a new (or old) government. In the run-up to the General Election, one party in particular polarizes the public: The anti-European UK Independence Party (UKIP), led by Nigel Farage.  In its manifesto, UKIP suggests—amongst others—that the UK should leave the European Union to avoid external regulation of British policies.  More precisely, an exit from the EU would enable the United Kingdom to tighten its immigration regulations.  UKIP advocates a point-based system, similar to the one in Australia and Canada, which will ultimately limit the overall number of immigrants.

The latter proposal is very much in line with the requests of Pegida—the Patriotic Europeans Against the Islamization of the West (or, rather, the Occident). Since October 2014,  thousands joined the movement’s weekly demonstrations; these started in the East German town Dresden and then spread to other cities all across Germany and Europe.  Pegida campaigns in particular against the increasing number of Muslim immigrants in Europe.  Banners that were held up during the protests in Germany called for “the preservation of our culture“.  The initiator of Pegida—Lutz Bachmann—stepped down from his leadership role after photos of him posing as Adolf Hitler surfaced; he was reinstated as a co-leader shortly after.

Both UKIP and Pegida are supported by the general public for its anti-immigrant policies.  What is surprising though is that these supporters are primarily living in regions where there are very few migrants or foreigners. UKIP (Image 1) received most endorsement in constituencies with a low proportion of immigrants. And in Saxony, the German State where the Pegida movement started, only 2.2% of the population are foreigners.

How can these patterns be explained? Two theories have been put forward to predict “the relationship between the minority proportion and hostility felt by the majority“ (Biggs & Knauss, 2012, p. 633).  On the one hand, as more foreigners move to a country or neighborhood, economic, cultural, and political threats might arise.  Migrants could be considered as a competition for (scarce) jobs and other economic resources.  An overall lack of resources further enhances these threats (Quillian, 1995).  In addition, threats are often instigated when the media or political leaders frame migrants as a source of danger and uncertainty (Mols & Jetten, 2015).  Ultimately, a larger population of immigrants could result in greater prejudice against foreigners and the support of anti-immigration policies.

Interestingly, only the perceived—and the not the actual—number of migrants in a country shapes negative opinions towards foreigners (Fasel, Green, & Sarrasin, 2013).  Moreover, direct encounters with many foreigners does not elicit anti-immigrant attitudes.  On the contrary, being friends or working with immigrants limits the impact of perceived threat on negative attitudes towards foreigners (Schneider, 2008).

In other words, and contesting the previously described competitive threat hypothesis, a growing proportion of immigrants creates more opportunities for contact with foreigners, which reduces prejudices.  Previous research lends support to this intergroup contact hypothesis (Allport, 1954).  A survey of 4107 registered voters in France pointed out that respondents who lived in departments or communes with a high proportion of immigrants held less negative opinions towards foreigners (Jolly & DiGusto, 2014).  And an increasing proportion of immigrants in a town or city predicted as well less votes for the French Front National—a populist-right party—in the 2007 French presidential elections (Della Posta, 2013). Wagner, Van Dick, Pettigrew, and Christ (2003) showed that higher levels of ethnic prejudice in East versus West Germany were largely due to less personal experiences, especially intimate and important friendships, with foreigners.  Finally, membership in the British National Party (BNP)—an extreme right-wing party—was weakest in neighborhoods with more than 1/10 foreigners (Biggs & Knauss, 2012).  More precisely, a high proportion of minority members and low segregation between British and immigrants decreased the likelihood of membership in the BNP.  Segregation severely limits opportunities for contact with immigrants and increases at the same time levels of perceived threat (Pettigrew, Wagner, & Christ, 2010).

In conclusion, it is likely that the observed support for anti-immigrant policies in the UK and Germany can be explained by a lack of direct experiences. Parties or movements such as UKIP and Pegida benefit from the fact that many citizens have limited contact with foreigners but are rather hearing threatening stories—which are hard to grasp or verify—about them.  In order to mitigate these effects, policy makers, educators, and citizens

b) have to actively promote positive encounters between foreigner and locals

and c) should strive for a balanced public dialogue about immigrants, their lives and habits, that focuses on similarities with the host communities rather than on differences that can evoke threat.

The original article was published on Homo Sociabilis