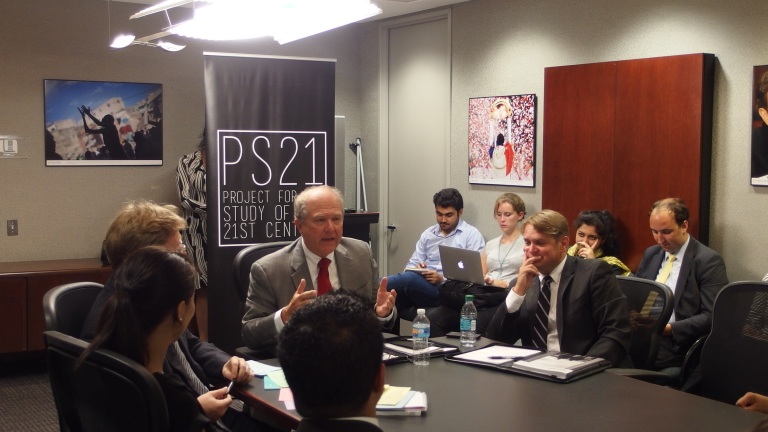 This report is generated from a discussion held on Tuesday, July 21, 2015 by the Project for Study Of the 21st Century (PS21) in conjunction with New York University’s Just Security and the Pentagon’s Special Inspector General for Afghan Reconstruction (SIGAR).

Many thanks to the Thomson Reuters office in Washington DC for hosting.

You can find a transcript of the event here and video here:

With the drawdown of US forces, the Afghan government is taking control of ever greater amounts of reconstruction and services. It faces huge challenges, however — not least in simply keeping track of the money. In many cases, it lacks the budget to continue services previously funded by Western governments or NGOs.

This year, the Afghan security forces have been taking a much greater burden in the fight against the Taliban. Neither the US nor Afghan government, however, really knows how many Afghan security forces actually exist. There are widespread cases of “ghost soldiers” who do not exist and whose pay is simply embezzled.

Sopko: I feel almost like Dickens in the Tale of Two Cities: “it’s the best of times and it’s the worst of times.”

The security situation has deteriorated. Just three years ago, I could travel around the country. Now I can’t even drive a mile and a half from the embassy to the airport. I had to be flown back and forth.

The new Afghan government, however, is making an effort to redress the situation particularly when it comes to corruption. President Ghani and senior officials have taken time to review major contracts and are attempting to impose wider reforms.

In one case, that has meant pursuing those responsible for attempting to fix a billion-dollar fuel contract. SIGAR had shared information on that with the previous government with no response. Under President Ghani, they acted to fire corrupt officials and rework the deal.

Sopko: The good part of it is that we have the new National Unity Government. And I’m cautiously optimistic. We have a government who really cares to do something about it. And they want to fight corruption, they want to change the procurement system. They want to do a lot of things.

The problem is, they are a Unity Government, they have a very tenuous hold on the situation there. They still don’t have a Minister of Defence or Attorney General — which is really difficult when you’re in the middle of the fighting season.

In many cases, tackling corruption was simply not seen a priority for US forces at the height of the military campaign.

Wright: If you’re the commander of a Marine outpost, and the food is showing up on time fairly consistently, you don’t want to hear that $3,000 got paid along the way to get that truck to the forward operating position. When you think about a place that has had forty years of war-torn economic stagnation and subsistence sales and things, that’s a huge amount of money that washing along the system.

In counterinsurgency, the supply lines are the front lines. You had a massive distortion of the economic incentives just along the road that you were sending the trucks.

Sopko: That means paying for the teachers, the roads, the clinics, the military.

Success is more likely to happen if we don’t pour too much money in that we totally destroy and distort the system. You have to build programs that realise we’re not in Norway, we are in Afghanistan.

Make certain the program is designed to take into consideration sustainability. Why build something if the Afghans can’t sustain it? We have instances of that all the time. I just met with the Minis\ter of Health. We were talking about one clinic that the fuel consumption in the new clinic is equal to his entire provincial healthcare budget. He basically said, “What am I going to do with it?”

Even after 14 years of war, data on what actually happens within Afghanistan’s government is frustratingly sparse.

Sopko: We don’t know how many Afghan police and military there are. I was warned about this by President Ghani before he became president. He was concerned about it, but we really don’t know what is going on.

Sopko: Obviously, there has been a lot of success. There are more kids going to school. Healthcare is improved. Fewer women are dying in childbirth. The big question is: Could we have done more with less? That’s the issue we face.

I think if you want to look at programs in general, they are more likely to succeed if they meet our strategic goals, the Afghans know about the program and want the program, there is buy-in from the community, you build the program that in coordinated, not only inside the U.S. government, but also with our allies. Make certain you aren’t building a bridge that the Italians are building or the Japanese are building. 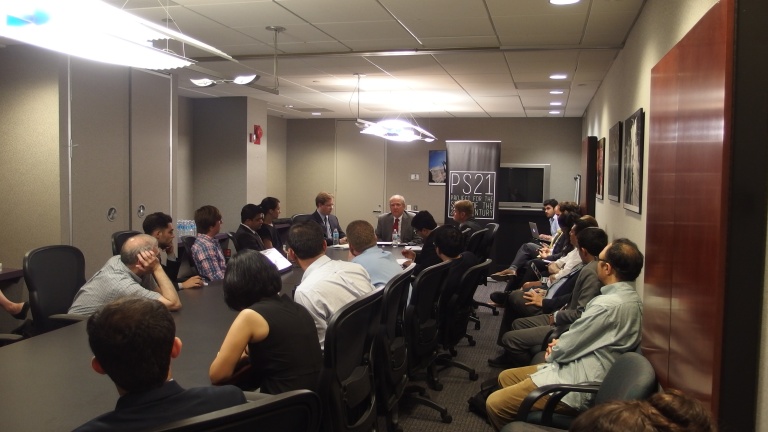 Many US and Western officials have only passed through Afghanistan on extremely short-term assignments — sometimes weeks or months. This has left very little oversight and huge opportunities for corruption.

Sopko: People who want to steal know that. We’ve actually talked to people who are over in Afghanistan and the crooked contractor or sub-contractor knows that the contracting officer or contracting officers rep in in for sixty or ninety days so he’ll wait until that guy leaves and a new guy comes who has no idea what he signs off. They can play the game. That’s why you need continuity. You need somebody over there who knows, “well we already built a bridge over that town. Why am I building a second one?”

Sopko: We have about forty in country and about two hundred in total. The Afghans know that and appreciate it. When they see a colonel come in and sixty days later another colonel comes in, or they see an AID officer and ninety days later somebody else comes in, they know they’re getting the run-around. They really want somebody who is going to be there for a while.

It remains to be seen what lessons will be learned for further missions.

Wallace: The real challenge is to try to institutionalize these lessons so that the next time this happens, and it surely will in one form or another, we’re not wasting resources and money and even lives that come from that. How do those lesson get institutionalized?

Sopko: Many of the problems were identified are not new. They are real old. What we are identifying in Afghanistan are problems the GAO, the other inspector general’s have identified for 20 or 30 years. DOD procurement has been on the list with a bunch of other things. The problem of rotation of troops has been a problem in the US government since the Korean War… the problems of not having a dedicated procurement corps go back to Reagan.

Far too many reports on problems within the US government never see the light of day. SIGAR offers a way round this process because of its independence.

Sopko: We are the only agency who doesn’t have to get our recommendation cleared by the Secretary of Defense, Secretary of State or AID, or OMB. There are many many many good ideas, good suggestions that have come out of all those government agencies who have been quashed by the internal politics of each agency. I got a really good briefing by AID people who came up a way to fix the whole HR problem, but it never got out of the building. I’ve talked to people at State who have come up with a great idea to do this. Never got cleared by the inter-agency process.

Publication of SIGAR reports has been contentious within the US government (although its congressional mandate means there is no way for government officials to block them).

You publish and if they are worth publishing, they are worth publicizing. And my massive public relations team, of two people, will get the message. I had an open mic presentation at the (Kabul) embassy last time I was there… I remember somebody saying well why do you have to publish things and I said well why not

Many times … we’re basically identifying a problem that we’re not going to have time to look at, but it’s a shot across the bow and you’re more likely to have a secretary, an undersecretary, or a member of congress read the front page in the Washington Post or in the New York Times and say, ‘Hey, what’s going on here?’

Inadequate supervision of contractors has long been a problem.

Wright: You can’t have this old model where you hire a prime contractor and they deal with the subcontractors so we don’t have to mess with them. In an environment like this, I think it’s very important for us to learn how to have better visibility of who is involved with these entities and subcontracted entities. Who are the personnel? Is it foreign governments or people that may not share our strategic interests or tactical interests? There is definitely some stuff that we could learn and take away and take to the bank coming out of this.

Still, anonymous tips from contractors have been a major source for SIGAR in detecting problems.

Sopko: Many of our best audits have come from contractors. Everyone blames the problem on the contractors. 90% of the time the contractors are just carrying out a dumb contract. It’s not their job to say this makes no sense.

The international nature of the Afghan mission has generated its own problems.

Sopko: Donor co-ordination is a big issue. It’s not the U.S. that lacks co-ordination, but the donors don’t always co-ordinate very well and that really overwhelms the Afghans, when every donor has a different kind of conditionality, a different kind of requirement and all of that. You know the poor Afghans are drowning in requirements. So you should try and harmonize all the votes, but I’m not certain it’s going to happen anytime in the near future.

Despite some Afghan criticism, SIGAR says its reports are broadly well-received and have themselves helped Afghan officials tackle the issues they raise.

Perhaps because they are generally housed within US government departments, other inspectors general — such as those at the Pentagon, State Department, etc — have tended to be less outspoken. They have also often been viewed with suspicion within their departments.

Many of the serious problems identified with US and other government services in recent years — poor care at Veteran’s hospitals, problems with body armour, the security flaws that allowed the OPM hack — would have been sold earlier had the Inspector Generals for those institutions made more fuss about deficiencies they found.

Sopko: Here’s the thing and it’s a slippery slope: when I stop… Where do I stop? I’m only going to withhold information now but it just keeps going.

I don’t think the IGs have, as a body, lived up to the 1978 Act (that created them). I took an oath to do this and I think every one of them do. They can’t be fired. You know… Okay, so they don’t get invited to the office Christmas party. Who cares?

The reason why I’m doing this is because I was lucky. I had the opportunity to learn about oversight from (experts like) Sam Nunn, Bill Roth, Carl Levin, John Glenn, John Dingell and Henry Waxman… And I did it for 25 years. And they taught me: you’re not going to change the government unless you publicize it and repeatedly publicize it… And that’s how I do it.