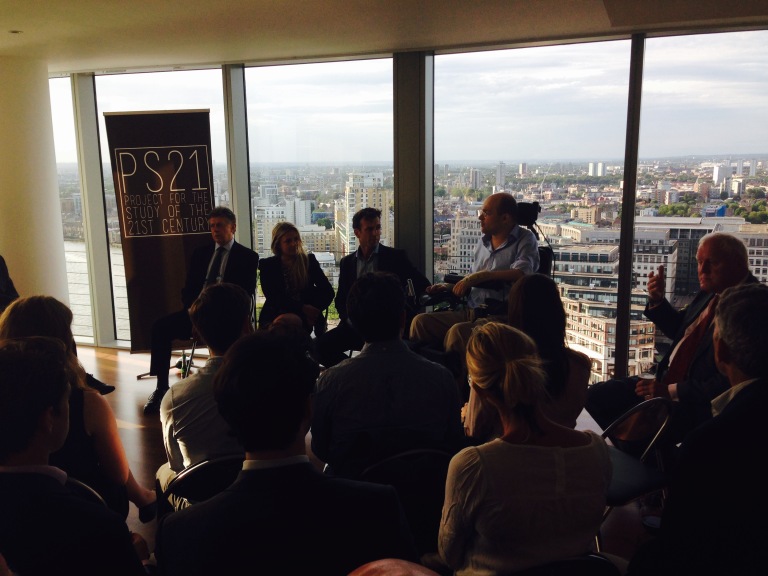 On July 6, 2015, Project for the Study of the 21st Century hosted a discussion in London on Kidnap and Ransom. Watch the video here.

The panel was as follows:

Nigel Brennan: photojournalist and author who was kidnapped in Somalia in 2008 and held hostage for 15 months

Kidnap for ransom has been a staple part of human criminality for centuries. In recent decades, however, the existence of kidnap and ransom insurance has created a small but sometimes lucrative industry for managing such incidents.

For those whose employers or others have taken out the right form of insurance, kidnap and ransom consultants will negotiate a hostage’s release and the payment of a ransom. This, however, can sometimes be at odds with governments, some of which—such as the US, UK and Australia—generally oppose ransom payments.

In particular, the Somali piracy crisis in the Indian Ocean as well as more recent kidnappings by Islamic State and others in Syria has raised the profile of both crime and the industry.

Brennan: I think it is higher profile. All over the globe, we become more knowledgeable about the kidnap/ransom industry [particularly] because of journalists being taken in Syria, Libya and places like that.

People can say you are creating an industry by paying out ransoms, which is one way to look at it. The way I would look at it is obviously from a family perspective of paying a ransom—you want a loved family member back.

The shape and focus of kidnappings varies widely around the world. Not all get the level of international media attention given to those of Westerners.

Damora: It is very different wherever you are. In Mozambique, you have South Asians who are being targeted. Express kidnapping in Latin America is huge [in these cases, individuals are kidnapped for 2 to 3 days and often taken to cashpoints to extract as much money as possible].

Brennan: What you don’t hear about is kidnappings in places like Mexico or that an actor because it doesn’t involve white Westerners spending large sums of money.

Kidnappers may be motivated by a myriad of factors beyond monetary gain, and many groups are largely driven by the “propaganda of the deed.”

Inkster: It is very much about propaganda in the case of IS, you know, demonstrating their power to do things, and highlighting the impotence of the governments of the individuals concerned to do anything about it. I have to say in the scheme of things, kidnapping for IS has been quite a substantial revenue earner, but I think that percentage of their earnings is diminishing.

IS derives revenue from a wide range of rent-seeking activities: extortion, the oil industry still to a significant degree but probably in unusual perspectives. So kidnapping is simply one of the rent-seeking lines of revenue that IS has got.

The advent of new technologies has enabled non-traditional forms of kidnap to develop, rendering the crime ever more difficult to tackle.

Damora: With online currency, bitcoins and things like that, and the development and spread of technology, the crimes have gotten more opportunistic and cyber extortion is a huge threat.

Inkster: This new approach, whereby you basically take somebody’s data and freeze it, encrypt it make it unavailable and demand a large sum of money to release it, is starting to become a more attractive option. I mean, the days when you went to rob the bank because the bank is where the money was, is gone. And it is a challenge because police forces, law enforcement, do not have anything like the requisite skills and resources to deal with this sort of problem, you know if it gathers momentum and reaches critical mass.

Inkster: If you look particularly at some of the European countries it is pretty clear that the governments and the intelligence services do actively engage in the process of kidnap negotiations [to pay ransoms and get their national hostages back]. France, Germany, Spain and Italy have all been involved. Intelligence services in those countries are engaged in brokering ransoms with a variety of different people.

It’s not just the European countries. The Turks have had a significant contingent of diplomats kidnapped in Syria by IS and it’s pretty clear that the Turkish intelligence service was the primary vehicle for negotiating the release of those people.

The US, UK and Australia take a very different approach—although they will not usually block a ransom payment or prosecute families who pay.

Brennan: I knew that my government, the Australian government, wouldn’t pay ransom. Their policy is obviously not to negotiate, facilitate or pay ransom. So I was very aware from the day we were abducted that it was going to end with my family, and with quite a substantial amount of money.

Inkster: If you like the extreme Anglo-Saxon position as espoused by the United States and the United Kingdom, you don’t pay an exchange bill because that evidently encourages the thing. Once you have paid the Danegeld, you’ll never get rid of the Dane, to quote Rudyard Kipling.

Considerable ambiguity often shrouds the legality of paying ransom because governments may prioritize national security on the whole before defending the lives of a select few.

Inkster: The United Kingdom government is one of those that doesn’t pay ransom, but it also doesn’t prosecute if ransoms are paid. So it’s somewhat of an ambiguous situation. I think the United States plays significantly in that direction, and there was a recent case where they made it clear they were not going to treat this as a criminal issue.

Brennan: From what I’ve learned after my kidnapping, [my family] was basically led down the yellow brick road by the government. There were a lot of conflicting reports from different government departments, like the Department of Foreign Affairs and Trade and the Australian Federal Police. So you have [DFAT] saying it’s illegal to pay ransom, and then you have the Australian Federal Police on the exact same day saying to my family, how quickly can you put out assets to pay ransom?

Just as strategies to manage kidnap vary, so do their outcomes.

Inkster: I would simply make the point that you can’t negotiate with fanatics. You might be able to engage in something that you call negotiations in order to buy yourself time, but… Negotiations imply concessions; fanatics don’t do concessions.

I remember one particular example in Iraq not long after the 2003 invasion where a particular group did kidnap a British national. We didn’t negotiate. We sent in the Special Forces to deliver a visiting card to these people because we were able to find them pretty quickly. And we saw the word going around very quickly after that raid: stop kidnapping the Brits, it’s not worth it. Stick to the Italians and the French because they pay.

Damora: That said though, the last fourteen people that were released from Islamic State were paid for by a ransom… Only one American out of Syria has come out alive. Whereas the rest, from the countries that do pay, are all alive now.

Due to differences in priorities, a global consensus on whether or not ransoms should be paid is not likely.

Inkster: I think the reality is in the broader picture, we’re never going to get consensus at a global level on an issue like this. It’s just never going to happen. Different governments are going to be driven by different motives, you know, they have concerns for their electorate, their own legitimacy, sustainability, et cetera, et cetera, and these considerations are going to drive what they do. So I think the idea that we can get a kind of global consensus that you don’t pay ransoms to kidnapers is pretty unrealistic.

The kidnap and ransom industry may intervene not only to facilitate the negotiating process, but also to mitigate the ambiguities of existing policy.

Damora: No one has ever been prosecuted—no individual or company—has been prosecuted for paying ransom to anyone. There’ve been threats of that, but as far as I know, it’s never happened. So when it comes to whether or not we’re going to get involved in a case, there’s nowhere in the world, we’ve done Syria, we’ve done Pakistan, we do extortion cases in first world countries. There’s nowhere that we wouldn’t operate.

Whether or not [the kidnap and ransom] industry has changed because of Obama’s new transparency in the policy, I would have to say I don’t think it’s changed. I think it is still status quo. American citizens are still going to be targeted for being American. I don’t think that there will be any more targeting, because there is now a clearer shepherding by the U.S. government on behalf of the FBI to help out victim’s families. I think, if anything, that’s a good thing.