By Linda Schlegel. Linda is currently pursuing an MA in Terrorism, Security, and Society at King’s College London.

Following the recent terrorist attack in London that left seven dead and several wounded and in light of the previous two attacks on Westminster Bridge and in Manchester, British Prime Minister Theresa May has promised to allow for more extensive law enforcement measures in fighting extremism. The Prime Minister stated that if human rights laws would prevent the government from pursuing their agenda against extremism, the government would “change the laws so we can do it”. UK intelligence services already possess a variety of intrusive powers to manage the threat that is perceived as especially challenging in Great Britain today, namely identifying, monitoring and countering ‘homegrown’ extremists and their supporters. The British counter-terrorism strategy CONTEST outlines not only how to pursue terrorists, but extensively elaborates on both violent and non-violent extremism and how both need to be addressed by the government. In giving this speech and even more when changing the laws, Theresa May does more than fuelling an already divisive discourse in the UK, she may unintentionally increase the support for terrorist organizations such as ISIS and Al-Qaeda.

The debate of security versus freedom is arguably as old as state structures themselves. As Hobbes already theorized, we trade part of our personal freedom to be protected by a larger collective. Today’s understanding, however, limits the amount of freedom(s) a state entity is allowed to restrict, first and foremost the unalienable human rights laid out in the United Nations Universal Declaration of Human Rights. Prime Minister May’s comments suggest that she is willing to undermine decades of human rights protection in the UK in order to fight extremism and terrorism. It is hardly a proportional response to the threat terrorism poses to the citizens in the United Kingdom to put non-negotiable rights in jeopardy. In 2015, there were about 1,700 fatalities due to car accidents in the UK, a number more than 34 times higher than the death rate caused by terrorism in 2017 and almost five times as much as in the worst year of ‘The Troubles’ in Northern Ireland. The disproportionality becomes even more evident when compared to the more than half a million death due to flu in the UK in 2015 alone.

Disproportionality and the possible deconstruction of long-standing progress on human rights protection in the UK are, however, not the only issue with May’s declared plan to limit human rights in the fight against terrorism. By putting human rights in jeopardy or even by simply stating the willingness to do so, May risks becoming an aid to the very forces she seeks to fight.

Social movement theory has long known the concept of political opportunity structure. Organizations seeking to change the status quo and to recruit supporters to their cause do not bring forward their propaganda in a vacuum. Social movements rely on a constant interplay between their own actions and the actions of the political elite and governments, that is, the political situation their potential supporters find themselves in. Governments can limit or increase the opportunity structures movements can use, for example by choosing between allowing protests to take place or to fight the protesters. Certain scholars even take this one step further, advocating for state constructivism theory. Building on Jeff Goodwin’s work No Other Way Out, scholars such as Tom Parker have argued that state actions ‘construct’ or help revolutionary movements by making it possible to associate pre-existing grievances with state actions against a certain group. Parker discusses how “democratic states unintentionally sustain the terrorist movements they oppose” whereas Jessica Wolfendale argues that many of the current counterterrorism practices pose a greater threat than terrorism itself.

Prime Minister May’s first duty is to protect British citizens, but the approach she seems to advocate for doing so may result in the exact opposite of what she seeks to achieve. Her speech and, if put into practice, the changes in laws will enlarge the political opportunity structure ISIS and other organizations already have to recruit young males, who feel isolated and misunderstood by the government and society at large. The British government could fall into the trap the terrorists set out for them by increasing the resonance of the terrorist’s narrative that Western governments are willing to perpetrate atrocities against Islam and the Muslim people even in their own countries and that therefore Western states need to be fought. ISIS, for example, brings forward the theme of ‘victimhood’ as one of the six key components researcher Charlie Winter identified in their propaganda output. Stating the intention to limit the human rights in the fight of extremism fuels the victimhood narrative certain jihadists employ to recruit Muslims in the West. The very government, whose job it is to build an inclusive society protecting minorities, can now be framed as willing to infringe upon fundamental rights of Muslims as they are the primary suspect group in today’s terrorism. As CONTEST, the UK’s counter-terrorism strategy, has been shown to be disproportionately felt by Muslim communities anyways, this rhetoric will only fuel the possible susceptibility to radical world views.

The Prime Minister openly stating the willingness to infringe upon human rights, a fundamental pillar of Western liberal democracy, the chances of further alienating certain parts of society cannot be overestimated, which may increase the risk of susceptibility to radicalization. Terrorists and the extremist ideologies behind their actions need to be countered by governments and security measures are necessary, but the risk of increasing violence seems immense in this case. State repression can exacerbate grievances, especially if felt disproportionately by a certain group in society and the British state runs the risk of playing into the hands of terrorist ideologues. 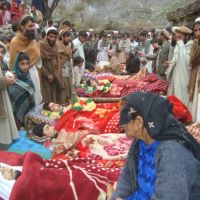